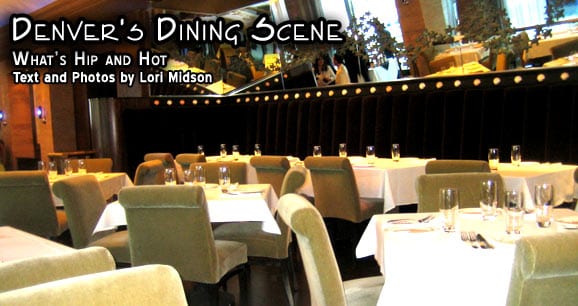 Here, amid the cozy banquettes, amber-lit sconces and striped wallpaper in tones of toffee and coffee, oenophiles and foodophiles get the best of both worlds. The hefty wine bible proffers 35-40 pours by the glass, while Yontz’s determinedly Americana menu parades a beadroll of uncomplicated foodstuffs.

For something decadent, try the lobster bisque or oysters Rockefeller, and then mooove on to the hanger steak topped with blue cheese and grilled onions. If you’re in the mood for celebrating, the stunning wine room is the ideal place to pop the cork.

Virgilio’s Pizzeria Napoletana — Scoff if you choose, but secretly smug Lakewood insiders know they’ve got one of the best new pie palaces in the city at Virgilio’s Pizzeria Napoletana, a one-year-old restaurant that’s packed with pizza snobs who can’t get enough of the crisp-crusted marvels crowned with traditional toppings. Only those a few sausage coins shy of a full pie can order a lone wedge.

The tangy tomato sauce is made fresh, the dough is proofed for two days and the charred and chewy — but never flimsy — crust holds its weight. Order the House Favorite layered with ricotta, garlic, sundried tomatoes, spinach and sausage, and revel in pizza paradise. The unassailable, chocolate chip-pelted cannolis are the ideal way to end on a sweet note.

Chopsticks — Asian food aficionados have a new den in which to savor sophisticated Chinese fare.

Chopsticks, a surprisingly elegant — even opulent — food temple near Federal Boulevard’s Silk Row, parades a stellar smorgasbord of authentically rendered Hunan and Szechuan specialties served in swank surrounds. Think marbled tables, stately dark-wooded chairs upholstered in plush fabric, gleaming hardwoods, modern, stark white plateware, and an urban color palate. Even the service —could it be more accommodating? — is a step above.
And, oh Lord, the food. Chongqing chicken — garlic-infused, crisp-crusted squares of succulent meat tumbling with mouth-searing chilies — is flat out heavenly, as are the mouth-watering pork dumplings, soft pockets of spice-specked pork pooled in an ambrosial broth. Take a bite, and the juice inevitably dribbles down your chin, but you’ll be too smitten to care.

Lola — There’s an avalanche of activity in the Lower Highlands neighborhood, and Lola, the celebrated coastal Mexican dining den that charmed Washington Park urbanites in its former location on South Pearl Street, is the latest hotspot in a bumper crop of up-to-the-minute restaurants to hit this burgeoning ‘hood.

Behind the burners, working with hustling intensity, is executive chef Jamie Fader, who ranks among the top chefs in Denver. When you taste Fader’s decadently rich creamy corn soup bolstered with fried avocado cubes or his fried oyster tostada skyscraped with jicama-cucumber slaw and housemade ketchup humming with habanero peppers, you know you’ve got a keeper.

Krameria Café — The last time I brunched at Krameria Café, a venerable neighborhood spot in Park Hill, just about everything there left me woefully unimpressed.

The paint-chipped walls festered with dirt and the floor resembled a mess hall. The joint reeked of smoke, service was surly and the breakfasts barely surpassed McDonald’s. No more.

New owners have taken over the space, and the dump that was Krameria Café is now a spruced up, urbanized breakfast palace that makes ignoring the snooze button as simple as eggs over easy. Come in on a sunny morning, when the light shines through the wall of windows festooned with potted foliage, and the café is a welcoming gathering space aromatic with strong coffee and buttery bliss.

The foot-long chile relleno omelet — large enough to feed Fred Flintstone — is a belt-busting hip hugger of roasted Poblano peppers, Manchego cheese, tomatoes and onions. Behold the saucer-sized banana pancakes toppling with fresh berries and whipped cream, and thank the potato gods for bestowing Denver with the best hash browns this side of Idaho.