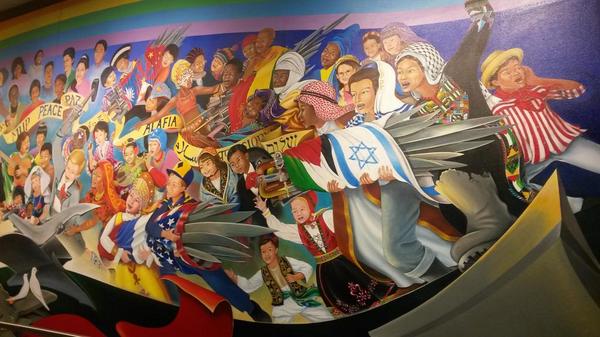 A Tour of the Murals at Denver International Airport

Where Are The Murals In Denver Airport Located?

The Spirit of Colorado Mural

This mural, located in Concourse B, is one of the most iconic pieces of public art at Denver International Airport. The mural was created by artist Leo Tanguma and depicts the history of Colorado from its Native American roots to its present-day status as a major US state. Tanguma used a variety of symbols and colors to convey this history, and the result is a stunning and visually arresting piece of art.

This mural, located in Concourse C, was created by artist Clark Sullivan. The mural depicts two dancers in mid-air, seemingly frozen in time. The muted colors and ethereal quality of the mural give it a dreamlike quality that is sure to catch the eye of anyone who sees it.

This mural, located in Concourse A, was created by artist Luis Jimenez. The mural depicts a family of five holding hands and walking through a field. The vibrant colors and joyful expressions on the faces of the family members make this mural one of the most cheerful and optimistic pieces at Denver International Airport.

Who Painted The Denver Airport Murals?

If you’ve ever been to the Denver International Airport, you may have noticed the striking murals that adorn the walls. These murals are the work of artist Leo Tanguma, and they tell a story of hope and humanity. In this blog post, we’ll explore the background of the artist and the meaning behind his work.

Leo Tanguma was born in San Antonio, Texas, in 1949. He is of Mexican and Cuban descent. tanguma began painting at a young age and had his first solo show when he was just 19 years old. He went on to study art at both the University of Texas at Austin and Colorado State University. After college, Tanguma moved to Europe, where he lived for 10 years. It was during this time that he developed his unique style of painting, which blends elements of Cubism, Surrealism, and Naive Art.

In 1986, Tanguma returned to the United States and settled in Denver, Colorado. He continued to paint and exhibit his work throughout the Denver area. In 1994, Tanguma was commissioned to create a series of paintings for the newly constructed Denver International Airport. The result was a series of seven murals that tell a story of human history and progress.

The first mural, “Children of Light,” depicts children from around the world gathering in Denver to start a new civilization. The second mural, “The Examination,” shows people being welcomed into this new civilization after undergoing a rigorous examination process. The third mural, “The First Dance Celebration,” celebrates the arrival of these new citizens with a traditional dance performance.

The fourth mural, “TheMarchoftheWorld’sRefugees,” shows people from all corners of the globe fleeing war, poverty, and natural disasters. The fifth mural, “New World Airport Commission,” features political leaders from around the world gathered in Denver to discuss ways to bring peace and prosperity to all nations.

Leo Tanguma is a world-renowned artist whose work can be seen in museums and public spaces all over the world. His most famous work is undoubtedly the series of murals he created for the Denver International Airport in 1994. These murals tell a story of human history and progress that is both inspiring and thought-provoking. If you ever find yourself at DIA, be sure to take some time to appreciate these remarkable works of art!